Even though Chromebooks are often not the first thing that springs to mind when you need a gaming laptop with high specs and horsepower. However, as ChromeOS offers support for various game platforms ranging from browser game to game streaming, you can still spend hours on end to enjoy leisure time with your favorite game on a Chromebook. Moreover, the Chromebook product is progressing more and more over time as a gaming device and soon Chromebooks gamers can enjoy even better gaming experience.

How to get into gaming on Chromebooks?

1. You can run browser-based game as it is most optimized for Chromebooks

Since a Chromebook is a device that is built mostly for Google Chrome browser use, you can find and run smoothly a wide variety of games developed for the browser only.

Most browser-based games do not have the flashiest design or graphics, but they can be an anti-boredom dose that helps you kill some time and blow off some steam.

Just like locally preinstalled games, there is just something for anyone. Whether you want to enjoy your free time or serious gamers wanting to conquer new heights, Google Chrome has all the games you need. And, here are few notable suggestions:

Slither.io – if you are hungry for dots, then you are looking at the right place. This is quite similar to the snake game on Nokia phones that we know and love. Log in to the game, you find yourself a snake looking for as many growing dots for itself, and will not stop until it becomes the biggest, or more.

Townscaper – one of the best games to opt for when you need to let your creativity soar. The game allows you to build your very own city from scratch, but on the water surface. You can start building your own Atlantis on your Chromebooks right now. 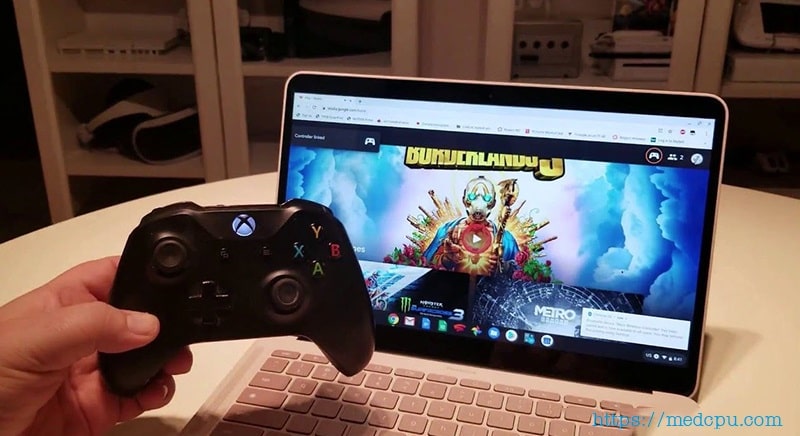 2. You can play Android games on Chromebooks from Play Store

For quite some time, users could download and install Android apps from a Play Store on a Chromebook. If you are an Android device user, then you may have known that Google’s Play Store is brimming with choices for games and apps. You are more than likely to find a gaming app that is of your interest on the Store.

To open the Play Store, you just have to find the icon down the ChromeOS shelf. From there, search for any game that catches your curiosity and leave it to your Chromebook to install and get it ready-to-play.

There is one thing to keep in mind is that when you have fun with an Android game on Chromebooks, your device is technically working as a powerful smartphone with a giant screen. Therefore, in games that are designed for touch screen input, you are put at a disadvantage with a keyboard and a mouse. Therefore, you should go for products with a touchscreen. However, as a Chromebook has much more horsepower than any smartphone could wish for, the games will be running pretty seamlessly that you can enjoy. 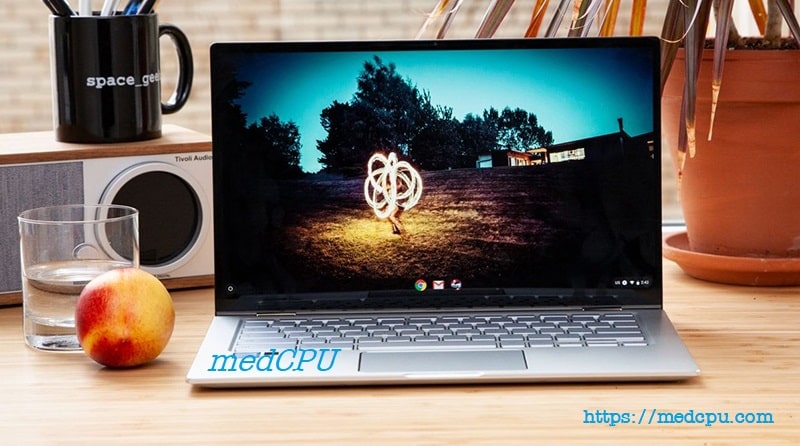 One perk of Google’s Store is its refund policy so you don’t have to be worried some game won’t work. If your game has struggles in executing the gameplay, make sure to refund within 2 days since purchase decision.

3. You can stream games to a Chromebook to run hardware demanding games

If you are a fan of games with intricate gameplay and fancy graphics, you may not be so confident in a Chromebook machine with less processing speed. However, it can still grant your wish with the help of game-streaming services.

With game-streaming, or cloud gaming whatever you may call it, you can take advantage of hardware in a higher spec device by running the game on the device and stream it to your Chromebook. While you can choose Steam Link if you already have a stronger device, GeForce Now service could be thought of if you don’t, as you will be renting a remote machine.

Apart from the mentioned service, Google actually has a game-streaming service of its own, which is Stadia. Stadia is officially a built-in service on recent models, proving how optimistic Google is about its cloud gaming plan.

The only downside of remote game streaming is that it needs a stable wifi connection. Moreover, your game may be interrupted if the connection is lost. That being said, there are plenty of wifi packages out there with reasonable prices, so you can freely entertain yourself with minimum game delay. 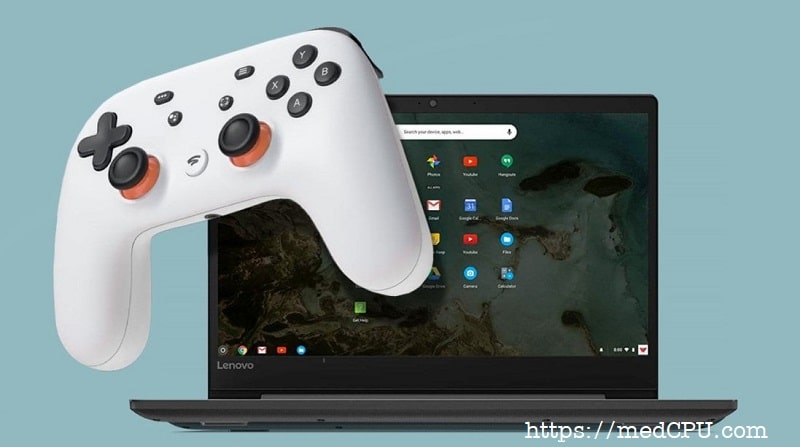 Some setbacks for gaming on a Chromebook

As Chromebook is made mostly aimed at the education sector, for web browsing and writing essays in particular, the designers have not put much weight on the gaming aspect. Therefore, the device has relatively lower processing performance and not as good visuals as dedicated gaming laptops. Moreover, ChromeOS fandom is still waiting for a separate graphics card assembled in their device. Therefore, it is a great feat to run heavy-duty games on many Chromebooks.

The machine will work great for light gaming like browser games or Android games. But you should be aware that some Android games are created for touch screens gameplay, so you may find it quite awkward to play with a controller or a keyboard and mouse.

One thing Chromebook gamers should consider is its reliance on other services to stream heavy games. As cloud gaming may ask for monthly subscription, this may hinder your gameplay if you don’t want to spend too much money for gaming. What is more, most remote streaming wants you to have at least 35 Mbps Wi-fi speed, so a good wi-fi modem is another cost to take care of. Anyhow, a committed gaming laptop can be as costly, and you are still saving a huge sum with an ever affordable Chromebook. 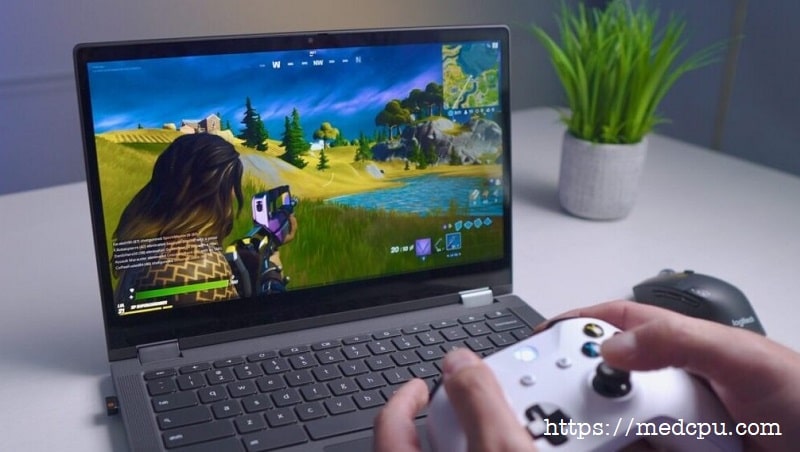 1. Can Chromebook run games with high graphics and system requirements by itself?

As Chromebooks manufacturers’ targeted customers are college students and office workers, who spend most of their time on a Chrome tab, most Chromebooks have just-enough specs. It means you may not be able to run graphic-heavy games with most products. However, you can always use a Cloud Gaming service to play your favorite game, or switch to a Chromebook with more processing horsepower.

2. What are the best Chromebooks for gaming?

Some honorable mentions are Samsung Galaxy Chromebook 2 or Asus Chromebook CX9. While the former have good processing ability and are super convertible, the former enters the competition with its military build and outstanding overall performance. Both products have a touch screen, and a dazzling display.

3. Do I need a Chromebook with a strong processing and graphics power to play games?

Even though a powerful device is recommended if you want to play any games, it is not compulsory as you can still enjoy light browser or app games with slightly lower performance. Another thing you should know is that a Game Streaming service like Geforce Now is always available on your device. And you can sign for a subscription month to experience every game on the platform, right on your Chromebook.

Chromebooks may not be the perfect gaming engine for all types of game out there, but it could be amazing for entertainment if you are into web games and android games, with just as sophisticated gameplay and design. Also, gaming on Chromebook has been a topic of debate for quite some time, and Google actually has promised some new features to support the game fans, like Steam support. 9to5Google signals that the RGB keyboard is coming to some Chromebooks, which is also worth the wait. Thus, there is still much more room for the Chromebooks product line to develop as a gaming machine, what we can do is to watch closely until it becomes a reality one day.