Laptops and desktops are two different beasts. They each have their own advantages: laptops are portable, while desktops provide a lot more power. However, there is a debate about which one is the better choice for gaming.

In this post, medCPU will discuss everything you need to know about Gaming Laptop vs Desktop PC with their pros and cons to help you make an informed decision on what’s right for you!

What is a Gaming Laptop? 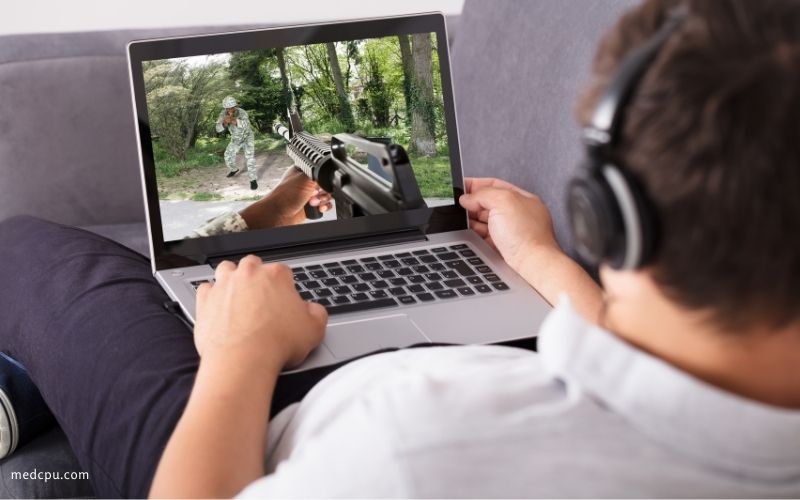 The best way to think about a gaming laptop is an everyday computer that has certain features designed for hardcore gamers. In general, gaming laptops have lower performance levels than desktops because they have to power all of their components using a battery (which provides less energy).

This means you’ll need more powerful hardware in your laptop than on your desktop… but also creates the opportunity for a better graphics card and CPUs.

– Lower performance levels than desktops due to battery limitations. If you want a great gaming experience, you’ll need more powerful hardware in your laptop compared with on your desktop.

What is a Gaming Desktop? 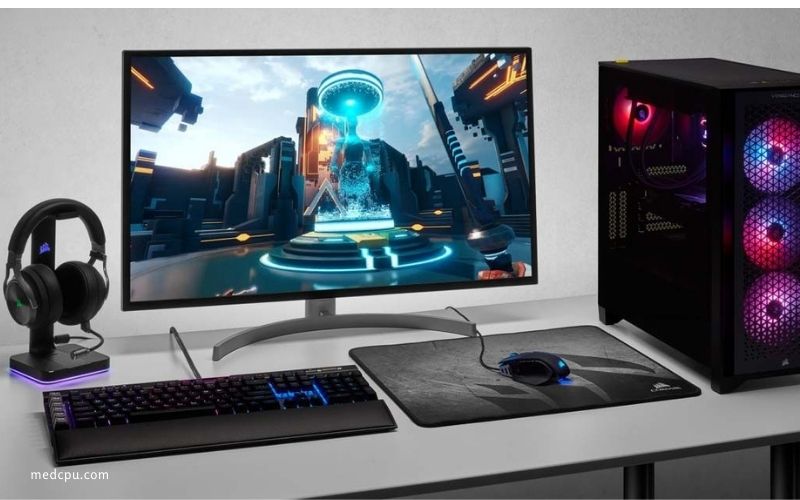 Gaming Desktops are computers that have been designed for gamers. They come with high-performance levels, and CPUs, which is why they’re the computer of choice for hardcore gamers around the world!

– Have to be plugged in (no battery limitations) so you may not want one if you plan on taking it out a lot or traveling often. Also, because these computers are made specifically for gaming purposes, they can cost more than an average laptop or desktop.

Although it may seem counterintuitive, you shouldn’t consider performance when buying a PC. Laptops used to be underpowered in comparison to desktop counterparts, but that’s no longer the case.

Gaming laptops are extremely efficient and powerful. Desktops still have an advantage in terms of high-end components, thermal considerations, and performance, but it is less so than it was once.

Performance is generally comparable so let’s take a look at other factors that you might want to consider. 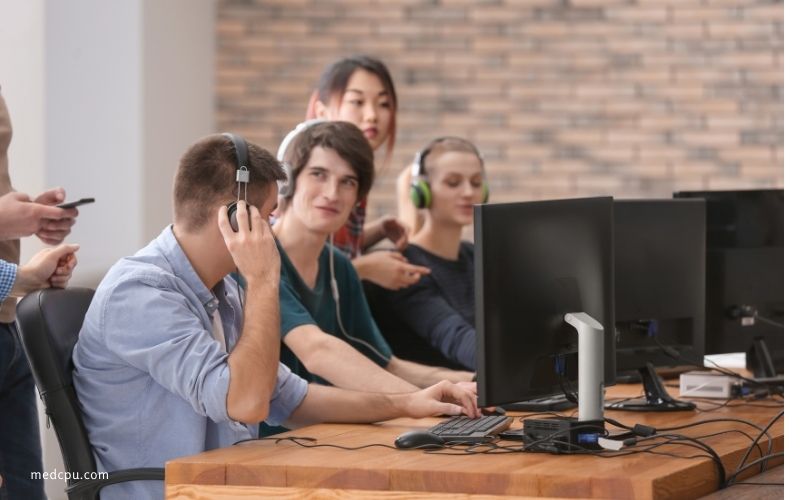 When comparing a gaming laptop vs desktop, the first thing to consider is whether you prefer a smaller, heavier, but more customizable, computer.

A laptop’s primary strength is its portability. The best laptop will allow you to do almost everything you can with a desktop.

This flexibility is especially important for someone who travels a lot. The latest laptops are smaller than ever so they can be used wherever you would (or should) normally take a desktop.

Gaming laptops often come with high-end hardware, which allows you to play AAA and competitive games wherever you are.

Laptops are powered by a battery. They also come with a display and a keyboard. However, you can create a desktop experience at home using the right peripherals. Although it can increase the versatility of your laptop, additional equipment such as docking stations and keyboards or external gaming displays may be more expensive than the initial purchase.

On the other hand, desktops are larger and more portable than laptops. Even the smallest form factor desktops will require power outlets and monitors. While some people are happy to transport a whole tower to special events like LAN parties, most desktop users limit their experience to one location.

The desktops could also offer extensive I/O support or the ability to connect other devices. This is generally available through the motherboard and expansion slots devices connected via PCIe*. You may find additional connectivity options such as front-facing USB or audio ports in the case. This allows for support for multiple monitors and non-standard peripherals. It also offers different USB connectivity options.

Although the desktop did not win the value category, getting the most out of your hardware with a standards-based PC is possible. After a computer’s life span has expired or is no longer needed, you can almost always upgrade it.

A gaming laptop is more easily upgradable than other laptops. However, even then, you can only increase the RAM or storage. Most motherboards have the CPU and GPU integrated into them, making upgrades difficult. Thunderbolt is an option on some Intel-based laptops, but it’s unlikely that you would want to use this feature.

Since very few people make significant upgrades, only the long-term thinkers who care about upgrading can do so. Desktops are still the most important.

Laptops are portable, but they also have their downsides. It is difficult to upgrade because of its compact form factor. Many laptops have the graphics card and processor soldered to the motherboard. This makes them difficult or difficult to access. Desktops are more accessible than laptops in this regard.

Laptops are much more difficult to upgrade because of their compact design. While some laptops allow you to upgrade RAM or storage, it is not usually possible for most users to upgrade the CPU or GPU. Consider that your laptop will be used for the life of the machine.

Many desktop computers are also upgrade-friendly. The modular design allows components to be easily replaced, making it possible to upgrade your hardware whenever needed. You don’t have to buy a new computer every time your old one starts to wear out. Instead, you can incrementally upgrade your machine as needed, keeping your computer up-to-date.

Pre-built computers are often upgradeable. However, you should always confirm with the manufacturer that the warranty will not be violated by working on the system.

You can usually choose from a variety of core components when you buy a laptop. These include the RAM and storage, as well as the CPU and GPU.

You might have some flexibility in fine-tuning performance, but, for the most part, you will be using the same hardware from the time you purchase it until the day you replace it.

This is also true for your laptop’s visual design. Although there is more variety than ever, you can still choose from pre-existing forms with limited customization options like keyboard backlighting and custom paint jobs.

Customization is one of the biggest draws on desktops. You can easily swap out hardware to be sure that you have what you want and nothing you don’t. A desktop provides:

There are many options for custom hardware. You can have complete control over the hardware in your system.

Highly controlled performance. You can customize hardware to make sure your computer runs at its best. A desktop has more surface area than a laptop, which means that it can be used for cooling.

There are many options for cooling solutions, including fans and All-in-One CPU coolers. You also have the option to create custom cooling loops to provide customized thermal solutions that meet your hardware needs.

There are more aesthetic options. You have more aesthetic options with desktops. You can choose from different sizes, brands, and specifications for each component of your computer. You can customize the performance of your computer with cooling solutions and hardware that are carefully chosen. But, you can also make your vision come to life by creating a visually distinctive machine.

Pre-built PCs are still available for those who prefer customization. You can choose the contents of your new computer before some vendors assemble it. This allows you to enjoy the advantages of a home-built system, even though you did not build it.

Click here to read also our comparison between Laptop vs Tablet.

Gaming laptop vs desktop: What is the Cost?

It’s challenging to compare gaming laptops with desktops because of the large number of configurations and the high cost of components. However, a quick look at a few examples can help you see some trends.

We compared several machines in the G series of Dell’s that are close to entry-level.

The gaming desktop is $200 cheaper than the laptop, which comes with a 9th Generation Intel Core i5 processor, GTX 1660T (the laptop has a Max Q version), and 8GB RAM. However, the laptop gets dual-channel RAM, while the desktop sticks with single-channel RAM. The desktop is twice as big as the laptop but has a slower and more clunky spinning hard drive.

This desktop is even more affordable at $679.99 for a Core 9100 and GTX 1660Super with the same RAM, storage, and storage. This laptop is cheaper because it uses parts from the last generation.

However, the initial cost of a desktop is higher than expected. You will need a monitor, especially a high-quality one. The keyboard and mouse that come with prebuilt are inferior. These will not come with any of the items you build. You may also need headphones or speakers. The screen, speakers, and keyboard come with a laptop. You will need a mouse and headphones for gaming. However, the screen is not as large as a desktop monitor.

Pre-built desktops have a higher labor cost. You could save money and get better components if you build it yourself. This is the one we made on paper to compare it to the Dell G5:

Prices fluctuate, and you can put more money in any part. We had the same CPU, GPU, dual-channel RAM, faster RAM, and the same storage in NVMe SSD. But we still had enough money to buy a cooler.

There are many deals available if you are looking for a laptop. Gaming laptops equipped with Nvidia GeForce RTX 2060 will drop to $999 over the next few months. However, a desktop still holds the most value in computing power and computing performance, at least before you purchase peripherals.

Gaming laptops may be an option for some PC gamers, but desktop systems remain the standard. Gaming enthusiasts are proud to choose every component and design of their system. They want their system to work exactly how they want it to.

Gaming desktops offer more flexibility in budgeting. You don’t have to spend the whole amount upfront for a gaming computer. However, you can spread out the costs of upgrading your gaming desktop over time.

This flexibility and custom design can be highly appealing. Despite this, bulky desktop systems are losing popularity in the face of slimmer devices such as the Razer Blade 15 or Asus ROG Zephyrus G15. These devices offer more gaming performance than most users require, are compact and affordable, and have a reasonable price.

FAQs about gaming desktop vs laptop

Does a gaming laptop run hotter than a desktop PC?

It’s debatable whether gaming laptops run hotter or colder than desktops. The important thing to note is that their performance levels are different: laptop components have a low power supply, meaning they produce less heat.

If you plan on playing for hours at a time, your laptop may start to overheat because of this design issue – and the problem will only get worse if it’s plugged in while also being played with!

95 is not too hot for CPU, but it will be tougher to keep the laptop from overheating if you plan on playing games or running programs that require a lot of power.

The problem with these devices being plugged in and played at the same time is they use up more battery life – so when your computer starts heating up because of this design flaw, you’ll have less energy available to solve the issue!

We hope we’ve helped shed some light on the debate between which computer type is best suited for gamers – namely by discussing everything from what each one offers to how these two devices differ when it comes to features like heat production. Ultimately, choosing either one will depend on what’s most important to you on a computer and your budget.