One of the most highly anticipated CPUs of the year is finally available. AMD’s Ryzen 9 5900X has challenged Intel’s i9 10900K in countless gaming benchmarks, but which one will reign supreme? Both AMD Ryzen 9 5900X vs Intel Core i9 10900K have been successful in the PC market for high-end video editing, rendering, and other performance-heavy tasks.

In this article, MedCPU will compare these two high-end processors to find out which one is better. Let’s get started!

You can see that there is a problem when comparing these two processors. The nearly $500 10-core Intel Core I9-10900K appears to be missing two cores…or the $549 12-core AMD Ryzen 9 9 5900X added two more cores, depending on your perspective. 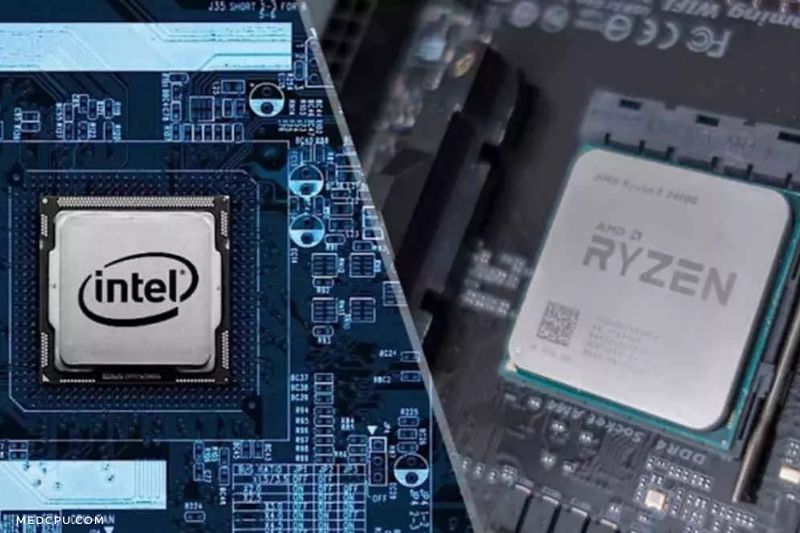 Like five years’ worth of desktop processors, the 10-core Intel Core i9-10900K is based upon a 14nm lithography processing, which has been renamed here in 2020 as a 14nm++. Although the company still uses a monolithic approach to its architecture, Intel engineers have shown it to be a strong foundation for iteration and subtle improvements over time, even though it is over five years old.

The new Zen 3-based Ryzens, just like the previous generation, is based on 7nm lithography. The company continues to use a multi-die chiplet method of manufacturing, which increases production yields. AMD can now put more cores in the chip package for a lower price. This keeps the Ryzen advantage of Intel’s 5900X and 10900K cost-per-core ratios.

While we still need to wait for third-party benchmarks, these claims are supported by the specifications and AMD’s first-party benchmarks. The Ryzen 5900X could be able to beat the Core i9-10900K almost everywhere.

The Ryzen 5900X has an advantage in thread and core counts, giving it an immediate edge in multithreaded workloads. This won’t make a significant difference in most games. Still, it will allow the Ryzen 5900X to maintain its now-typical AMD productivity lead in high-end tasks such as video editing and transcoding.

AMD claims its 5900X can beat 10900K by as much as 21 percent in certain games. However, smaller gains are more common, and it’s not uniform. The Cinebench 1T-test also revealed that the 5900X dominated the 10900K, proving its ability to handle single-threaded tasks. However, AMD hardware is better at Cinebench benchmarks and Intel’s.

We are all about gaming, so we will first take a look at 1080p benchmarks.

When testing CPU performance, we use 1080p for our benchmark resolution. This lower-resolution uses less GPU power than high resolutions like 1440p or 4K, which are more GPU dependent. The results will be biassed towards GPU performance and not CPU speed.

We can benchmark at 720p because it is less GPU bound and more CPU-bound than 1080p. This allows us to get more accurate results.

It is no longer possible to play games at 720p resolution, so it becomes pointless in terms of real-world usage. However, many gamers still play at 1080p (even professional e-sports players), so the following results will indicate the performance gains you can expect in the real world.

One of the most notable features of Intel’s Comet Lake series processors is their higher thermal design power (TDP). This has led to a higher power draw for K-series processors. However, the CPU’s internal heat spreader allows them to operate at comfortable temperatures without any cooling.

AMD’s 7nm process node advantage and architectural refinements of its 5000-series mean that their CPUs run at similar speeds to Intel’s but a smaller TDP of only 105 watts. They should run cooler, require less cooling to maintain comfortable temperatures, and use less power from their PSU. This makes them more suitable for smaller form factors, efficient PCs.

Intel has a more significant advantage in Overclocking if you like to tweak your hardware.

Gaming is still dominated by single-clock speed. This also applies to a few workstation tasks, such as Adobe Photoshop. While newer games may use multi-processor power in the future, single-core performance will remain the primary focus for at least next few years.

The 5900X clock speed is lower than that of the i9-10900K, as mentioned. While the Base clock for both CPUs is 3.7Ghz in theory, it only represents theoretical idle frequency. Most CPUs don’t drop below this speed, and certainly not in gaming.

The Intel processor is 0.5Ghz faster than the 5900X in a single-core Boost clock, but that’s only half of the story when it comes to performance. With the AMD Zen 3 CPUs’ architecture improvements, the 5900X can execute slightly more instructions than the i9-10900K despite having lower clock speeds.

See our comparison guide between Intel Core i7 vs i9 : https://medcpu.com/intel-core-i7-vs-i9/

AMD showcased the Ryzen 9 5900X at Zen 3 on October 8th, and it will be available for purchase on November 5. The suggested retail price for the Ryzen 9 5900X is $549. Because AMD has a strong relationship with TSMC, supply problems are much less frequent than for Intel. Although Ryzen 5000 CPUs may be in high demand, we will need to wait for the chips’ release to see if that affects pricing.

Check out this link to see How Much Does It Cost To Build A Gaming Pc: https://medcpu.com/how-much-does-it-cost-to-build-a-gaming-pc/